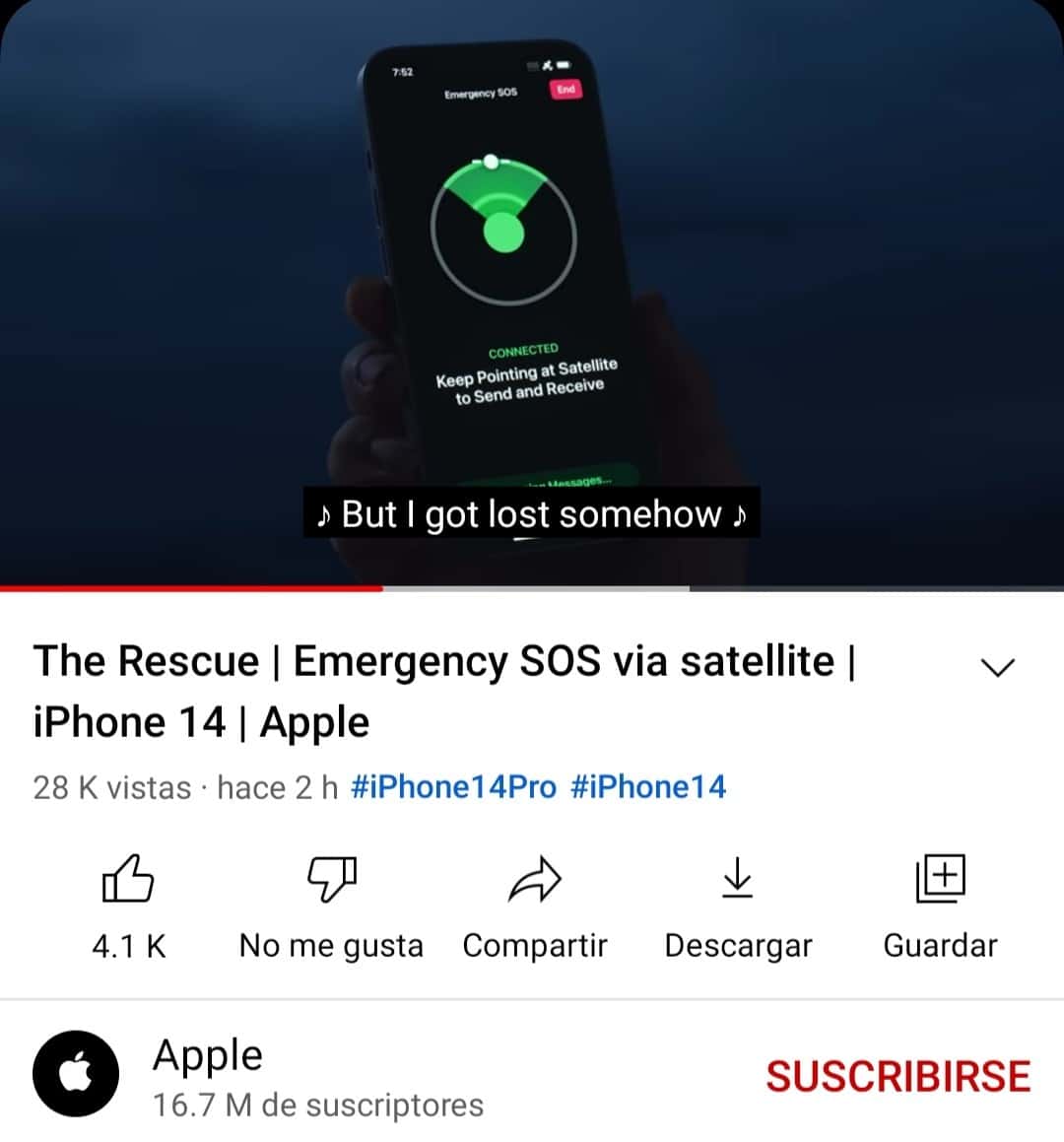 Apple today releases a “The Rescue” video ad, showcasing the new Satellite SOS feature. Apple has published on its YouTube channel a new announcement of a function that is only available on iPhone 14 models and that could help save lives.

The video, originally shown at Apple’s iPhone 14 event in September, is likely to air as a TV spot in the coming months.

Let’s talk about “The Rescue”.

“El rescate”, shows a man and a woman missing, the rescuers then board a helicopter and reach the couple on top of a mountain, after the woman contacts the emergency services through the “Emergency SOS via Satellite” function launched today in the United States and Canada. The feature is available on all four iPhone 14 models running iOS 16.1 or later.

With Satellite Emergency SOS, iPhone 14 models can connect directly to satellite, allowing users to send messages to emergency services when they are out of Wi-Fi and cellular coverage.

This feature allows people to connect to a Globalstar satellite to contact the nearest emergency services.

Due to limited bandwidth, the user must ask a series of questions to quickly communicate what type of emergency it is. Also, as mentioned above, you can send a text message in an emergency.

The main advantage is that emergency call centers do not need additional equipment to receive these messages.

In addition, it includes a demo mode to familiarize yourself with its use and be prepared in case of an emergency.

The system also expands the availability of the “Find My” function. To complete the information, Apple has made available a support document for the service.

The apple company says that sending a text message via satellite can take 15 seconds in “ideal conditions with a direct view of the sky and the horizon”, but that fallen leaves or other obstacles can cause delays or the absence of connection.

Countries with availability of satellite SOS.

Apple reports that the feature will be available in France, Germany, Ireland, and the United Kingdom in December, but did not give a specific release date.

When available, an option to send an emergency SOS text message via satellite will appear after dialing 911 outside of Wi-Fi and cellular coverage areas.

In the Emergency SOS Settings app, there is also a demo mode that allows the user to test the satellite connection without contacting the emergency services, as already discussed.

The service will ultimately be subscription-based, but according to Apple, it will be free for the first two years for all iPhone 14 owners in supported countries. It is not yet known how much the subscription will cost at the end of the free period.

“The availability of SOS emergency calls via satellite is an important innovation that will save lives,” said Mark Gilarducci, director of the California Governor’s Office of Emergency Services.

“The extremely important work Apple is doing to develop new and innovative solutions to help emergency call providers and first responders is a huge step forward in protecting Californians and the public in an emergency.”

One of the great utilities that the Alexa assistant has is to be...
Apple

Over the past few years, we've heard various estimates as to when the long-awaited...