TechSmartAerezona Developers
HomeTech NewsCommunicationDifferences between WiFi and LiFi: this is the wireless present and future

Differences between WiFi and LiFi: this is the wireless present and future The wireless networks They play a very important role today. We are used to the fact that the word WiFi has become something common in our day to day life, but you may not know very well what LiFi is. Beyond the proximity in the name and being another variant of wireless communication technology, it has quite considerable differences.

There is differences between Wi-Fi and Li-Fi technology. The first is the one we use most in our day to day, while the second is more of a future alternative. There are very different key points between the two.

Li-Fi (light fidelity) may be the term that less familiar to you of the two (or perhaps you have not heard it until now). It is a form of wireless communication in which the information we send and receive does not travel through waves, but rather is transmitted through light and is based on LED lighting. 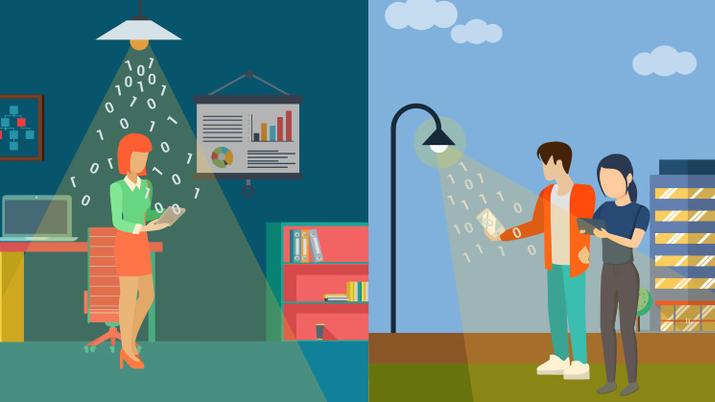 It is a model with some advantages over Wi-Fi. For example, it avoids electromagnetic interference between devices, one of the most frequent within WiFi. Another of the positive aspects that you can develop is a maximum speed that you can reach.

By taking advantage of visible light, in certain investigations they have been able to reach 10 Gbps speed. This allows information to be sent very quickly through optical signals above what is currently offered by WiFi technology. Let’s remember that, no matter how fast your connection is, WiFi has a limitation by which you could get at most, with all favorable conditions, about 300 Mbps.

Thanks to LiFi technology we could connect to the Internet with the light of lamps, streetlights or LED televisions. In addition to being cheaper, safer and faster than WiFi, no router needed. We will only have to point the mobile or tablet towards a light bulb to surf the net.

You will have already been able to verify the clearest one when explaining what LiFI is. Completely change the data sending mode of a device using light signals through LED bulbs (turning them off and on is equivalent to 0 and 1 of binary information), while WiFi relies on 2.4 GHz or 5 GHz radio frequencies. Another difference has to do with the distance this wireless signal can cover. WiFi can cover tens of meters, while LiFi has a much more limited range. It is higher, for example, than that of Bluetooth, but we would be talking about 10 meters in diameter as a margin. Obviously, since it is based on sending light signals, it does not accept obstacles either, so the supposed theoretical maximum range can be further reduced.

As we said, one of its main pros is the lack of interference. WiFi is very susceptible to problems when there are many devices nearby or when there are many neighbors using the same channel. In the case of LiFI there is no direct interference with other devices, although there are problems with light. For example, it would not work in direct sunlight, something that would greatly limit its use.

LiFi technology today is very limited, another of the great differences with the overcrowding in the use of WiFi. LiFi is mainly used in airlines, underwater operations and not much else. It is not intended for massive domestic use, as is the case with WiFi.

In terms of security, it is the LiFi that takes the point. WiFi networks can be penetrated and at a greater distance, while LiFi requires direct visual contact, since it emits light. While a wall or obstacle is a coverage cut, it also prevents information from getting through, making it a complete firewall.