The ease of sharing moving images that came with the development of the animated GIF format in 1987 continues to be of great importance 35 years later. And now it could be the turn of a new graphic format that would confer a similar facility to share three-dimensional images.

Parallax explains the difference in the representation of an image depending on the point of view chosen to capture it.

It would be a particular form of animated GIF that, without the need for glasses or 3D viewers (although it is also compatible with them), would show an image with a relief and depth effect on a normal screen.

This effect is achieved thanks to the so-called parallax or parallax effect, which takes into account the angular deviation of the apparent position of an object, depending on the chosen point of view. The practical demonstration of this example is the one that allows us to appreciate the position of different objects placed in front of a subject depending on whether one or the other eye is covered. The sum of both points of view, conveniently managed by the brain, allows stereoscopic and three-dimensional vision that makes it easier to perceive reality and different distances in depth.

In the case of photography, the Block format developed by the Looking Glass company It is based on the sum of images that, in a horizontal displacement movement of the image axis, show this parallax effect in relation to the viewer’s point of view and the situation of the objects that appear in the image. In practice, the apparent effect is similar to that of the viewer moving laterally, so that by varying their perspective on the objects, the holographic effect of three-dimensional depth is achieved. And all this without the need for 3D glasses. 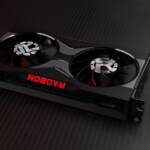 The first Radeon RX 6600 by XFX, ASRock and PowerColor photographed

You’re making cool stuff in 3D. We’re making it easier for people to see it.

Really, it’s as awesome as it sounds.

The Block image format produces that “scroll” in real time and interactively when moving the mouse over the imageand although what is really being seen are 2D images, the combination of the perspective of each of them and the management by the brain of that succession of still images is what manages to generate the three-dimensional perception.

According to Looking Glass each image in Block format is composed of around 100 images taken from a different perspective on the horizontal plane, so that, in the style of what happens with movement in animated GIFs, only when all those images that make up the file have been loaded can you enjoy the effect. This can make the Block files have a not insignificant size, always depending on the dimensions and resolution of the image, and can range between 2 Mb for images of lower resolution and size and can reach up to 50 Mb for 8K images.

It remains to be seen if the format becomes popular, although the truth is that 3D content, which even Facebook already allows you to add to your Stories, is not proving particularly popular.