A new publication reports that the Apple iPhone increases its sales in china by 46% in the last three months of the year. This makes it the largest smartphone manufacturer in the Asian country.

It had already been reported in different media, that Apple positioned itself at the forefront of global revenue in the smartphone sector. At the European level, it seems that it would be very close to matching this data. In China, iPhone 13 has dominated the market since its launch, according to the publication of Counterpoint Reseatch.

Web Research Analysts, reports that iPhone 13 sales increased 46%. Regarding the smartphone market in China, it only grew by 2% in the same period. 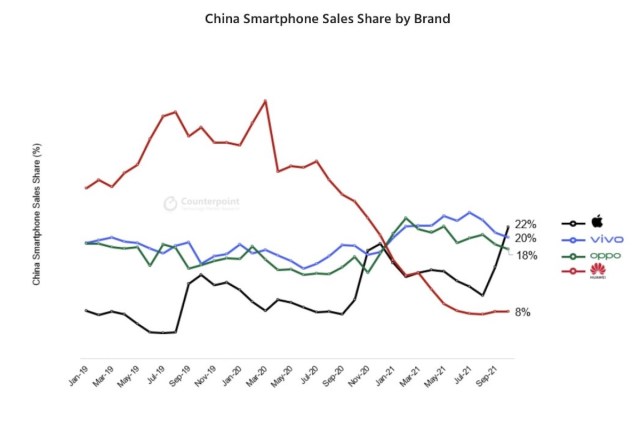 Admittedly, we are in a shortage market, so the Cupertino company itself could have gained more with better availability. Especially with the Pro and Pro Max versions of the iPhone 13.

From Counterpoint it is reported that, from the Huawei decline, the market dynamics changed and has allowed those of Cupertino to position themselves the number 1 since 2015. This success, has been driven largely by the iPhone 12, with the help of iPhone 13 since its launch.

The truth is that the market in general has experienced very slow growth throughout 2021. This has benefited Apple, thanks to the shortage of chips and the supply chain of the company of the bitten apple. It also points out that smartphone users have gone from acquiring low-end phones to high-end phones, which is helping companies that are betting on high-end devices.

A few months ago, expert market analysts reported that the iPhone 12 was going to become the best-selling iPhone in history. This seems to have been extrapolated to the new model and the iPhone 13 could break all records, if these supply problems are not encountered.