Just three months ago we talked about the great growth of Xiaomi, which in addition to continuing with impressive figures, managed to overtake Apple to position itself as the second most powerful brand in the smartphone market. However, as we pointed out, this success has been a fleeting thing.

And is that Apple has already managed to regain its position during the third quarter of 2021, counting on the great push of the launch of its iPhone 13 family, and the cheaper of its previous generations.

According to the latest Canalsys study, Apple was the clear winner in the last three months ending in September 2021. While its growth from 12% to 15% seems small, it was enough to push Xiaomi into third place after not seeing any growth for its 14% share of the market. Without changes in the rest of the table, Samsung remained undefeated at the top repeating with a year-on-year growth of 23%, while vivo and OPPO have managed to increase by 1% to 10% of the market share.

However, after the great crisis that led to the closures of some factories during the first stage of the pandemic, and after beginning to see the first signs of a return to normality, now the smartphone sector is now threatened by a new crisis: semiconductor shortage. 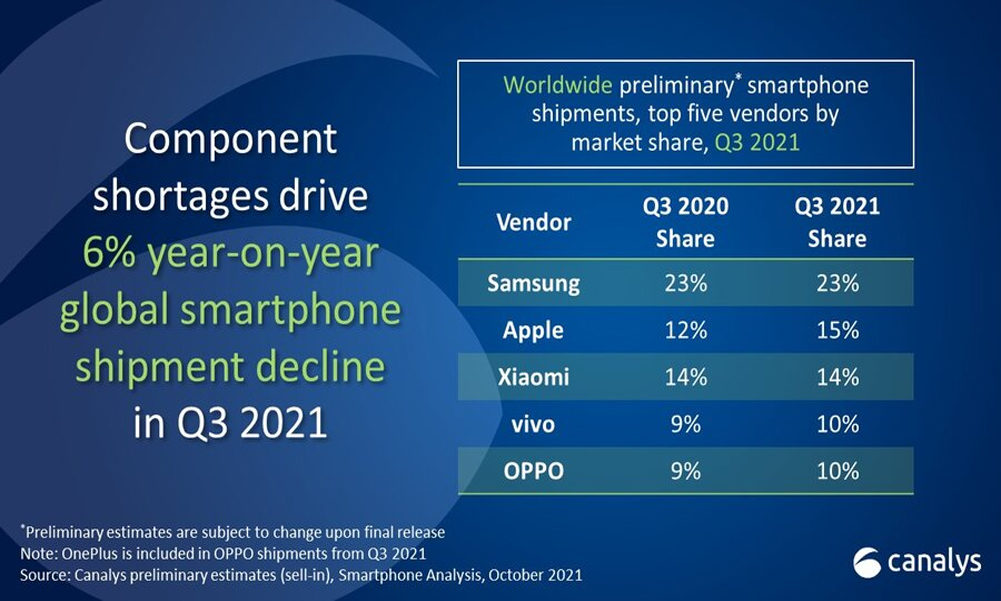 Canalsys herself shares the negative expectations for this market, with a “chipset famine” that won’t go away until well into 2022, With repercussions that will be accentuated little by little, forcing both semiconductor and smartphone manufacturers to fight to minimize their losses. Something that unfortunately will very possibly end up having an impact on the final price for consumers, already predicting significantly lower discounts for the next holidays and sales of the year.

Foundries are even raising prices to discourage the practice of ordering excess chips just to get priority on production lines. Meanwhile, smartphone vendors are also making last-minute adjustments to their order quantities and even their device specifications, adding to the chaos.

The Golden Joystick Awards Winners: The Best of All Time

The cameras of the S21 Ultra gain power: the Pro mode reaches the wide angle and telephoto lens thanks to the Expert RAW app

The Golden Joystick Awards Winners: The Best of All Time

The cameras of the S21 Ultra gain power: the Pro mode reaches the wide...

What is Amazfit and what is its relationship with Xiaomi

Crypto mining: 10 things you should know