The Alienware M15 R7 is Dell’s top-of-the-line gaming notebook for this generation. It was launched in Europe in August 2022, with specifications that promise to please even the most demanding player.

Will this machine be able to show great developments to the user in practice? We’ve tested a unit of it over the last few weeks and show it to you in detail in this full review.

We started with the design, with a construction that mixes magnesium alloy and plastic. The material disappoints for the price charged for the product, but in general it gives a sense of security in relation to its durability.

As we have an advanced gaming laptop here, your body follows the power. It is of the larger style, with a large casing and a thickness of about 2.4 cm. The weight reaches approximately 2.5 kg. That is, it is not the type of product that you will easily carry in your backpack.

The surface has a matte finish and manages to blend well hand comfort with the ability to deal with fingerprints. But I can’t say the same about dust and fur. The touchpad provides a pleasant feel despite the small area.

The keyboard is backlit with RGB lights, but we noticed a problem here. The LEDs do not include extra commands, such as accents or other signs. Given the Alienware’s unusual key layout, it might take a while to get used to typing everything right in dark places. At least Dell introduced the ABNT2 standard, something absent until then. 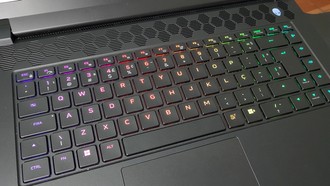 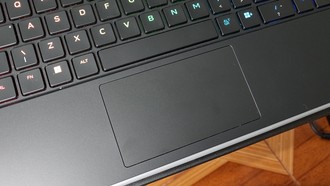 The company also put in a new cooling system, with twice the number of blades on the fans and air outlets in several directions. We feel a good efficiency of the technology, but the case still heats up considerably when well demanded.

The notebook has a rear block in addition to the monitor, where the USB-C port with Thunderbolt 4 and Power Delivery, one of the USB 3.2 Type-A inputs, the HDMI output and the power input are located. On the right side, the other two USB 3.2 Type-A ports appear; and on the left are the Ethernet port and the global headphone and microphone jack.

The number of entries is generally pleasing, but there is no memory card slot here. If even ultrathin ones bring the solution, not having it in a machine of this size is a fault of the manufacturer.

The box follows the proportion of the size of the notebook, but nothing more than the basics comes in it. You will only find the notebook, the power cord, the power supply and the instruction manuals. 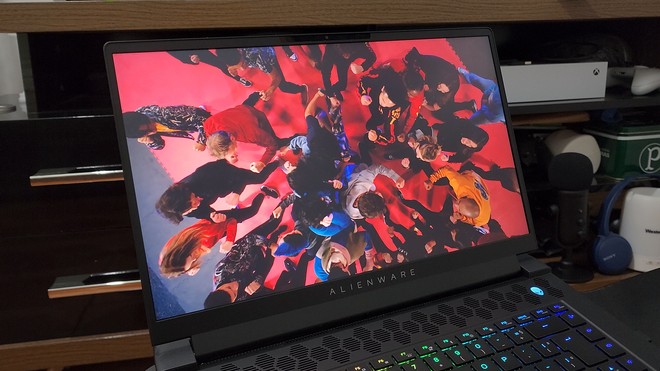 The M15 R7 contains a 15.6-inch display with thin bezels for the category. Dell doesn’t report the material, but the wide viewing angle seems to indicate for an IPS LCD. The resolution has been increased over the predecessor and now reaches Quad HD.

This Alienware has also improved the pixel density, and the quality delivered just by looking at this panel is very clear. You will still have support for Dolby Vision, to improve the image in compatible streams. 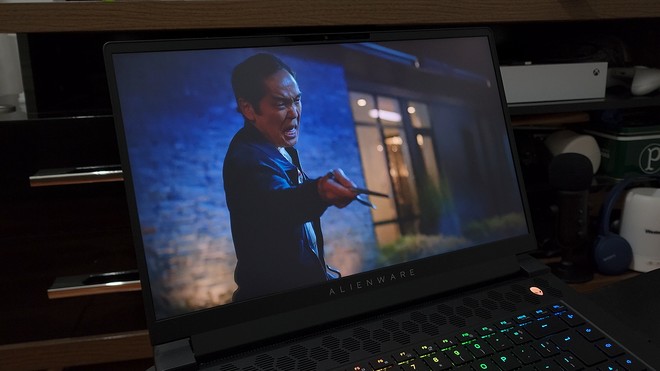 For gamers, the highlight here is the 240 Hz refresh rate. It guarantees high fluidity not only in animations but also in heavier games. The 2ms latency allows for a very fast response, especially in first-person shooter titles. But we’ll talk about that later.

Moving on to the sound area, we see a 5W RMS stereo audio system, with two speakers of 2.5W each. Each is located on one side at the bottom of the notebook. It is above average in power and does not disappoint at maximum volume. 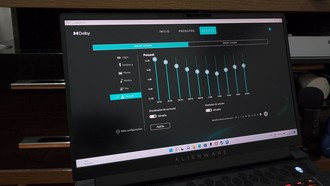 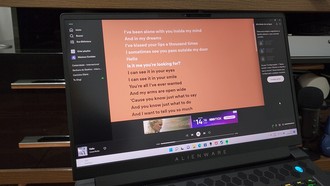 The quality pleases and presents a good balance between bass, mids and treble. If you need something fuller, there is support for Dolby Atmos natively, to better equalize the sound. 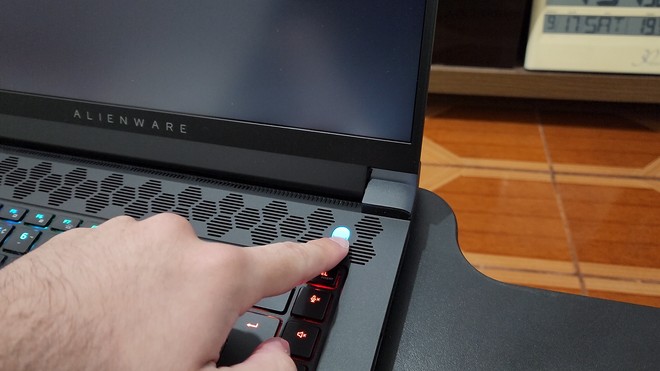 The Alienware M15 R7 is equipped with a 12th generation Intel Core i7 H-series processor. It comes with 32 GB of RAM and 1 TB of SSD storage.

The main specifications also include the NVIDIA GeForce RTX 3070 Ti graphics card, which stands out for delivering Optimus Advanced technology, which switches its use with the integrated graphics automatically, as needed. 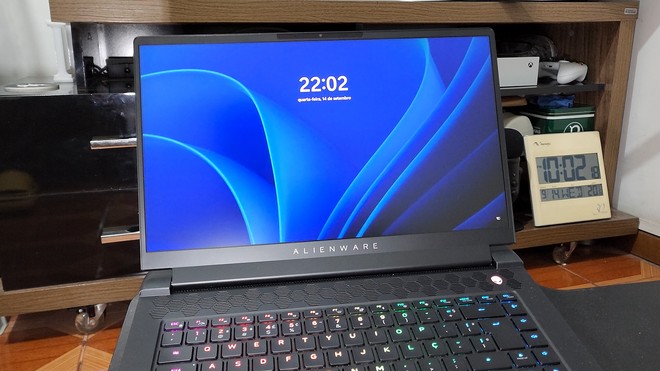 As for the software, this laptop comes equipped with Windows 11 natively. But what stands out in the system is the presence of the Alienware Command Center. It consists of a program that manages the entire operation of this machine.

In it, you can monitor the performance of the aforementioned components and configure different operating profiles, in addition to adjusting the keyboard lighting as you prefer. It’s the ideal software for those who like to overclock their components and customize the LEDs on the keys. 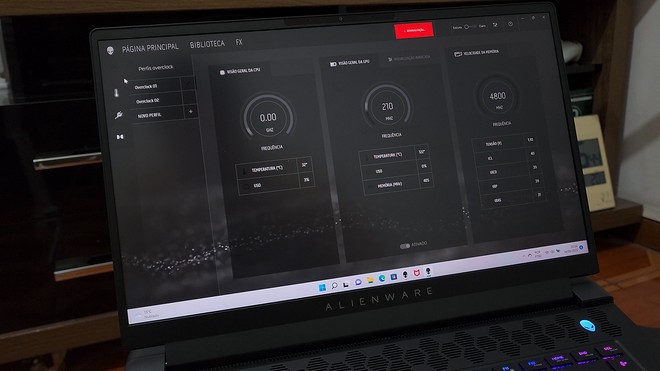 The notebook also has a kind of “turbo mode”, which can be activated with a button and allows not only to overclock, but also to activate the fans, to have a performance gain without increasing the heating so much.

As is expected from a machine of this size, you will have no problem for any action, however complex it may be. We did some benchmark tests and had high numbers overall. 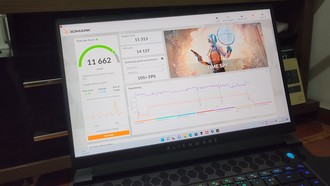 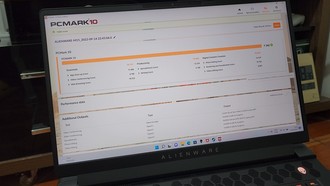 In 3DMark’s Time Spy, it scored more than 11,000 points, which is above Avell’s competitor A72 HYB. In PCMark 10, it reached around 7,300 points and remained at the top of the online comparison. In other words, this is a no-nonsense laptop when it comes to performance. 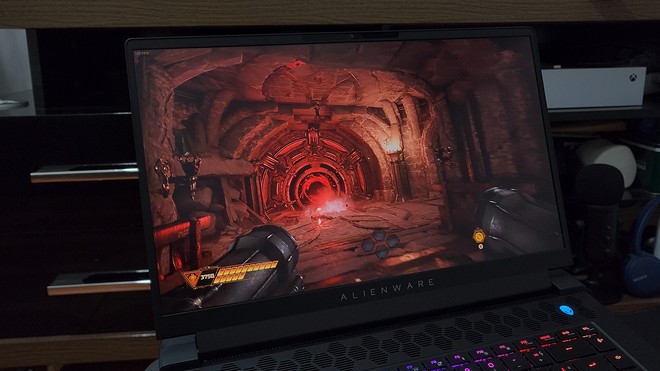 But after all, how does this machine behave in games? As it is the strong point of the M15 R7, we naturally have nothing to complain about when it shows its full power in games. We tried from the simplest to the most complex, all in full Quad HD resolution.

Starting with Fall Guys, the highlight here is the ability to keep up with high fluidity and without any choking in the midst of a multiplayer with so many simultaneous competitors. In Street Fighter V, the colors stand out more to the eyes, thanks to the high definition of this screen.

In CS:GO, we can easily highlight the high fps rate this machine achieves. Being a first-person shooter, being at an average of 200 fps makes a difference to shoot first than opponents, even more so with the very low latency present here.

We also tested the full power of the GPU in games like DOOM Eternal and God of War. In these, the presence of Ray Tracing technology is the main point, as the light and shadow scenarios end up making the experience even more immersive. 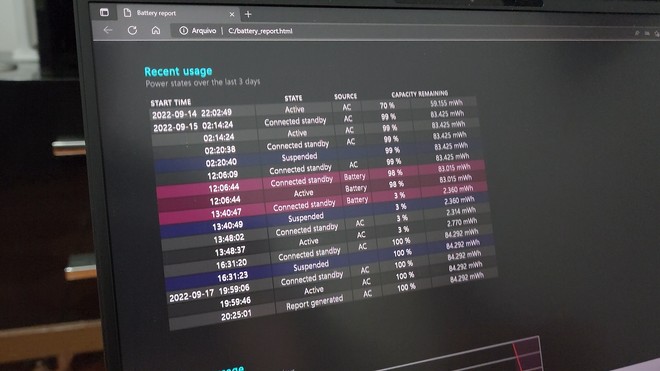 We arrived at the so-called weak point of this notebook: the battery. Here we did our traditional test with the simulation of a working day. We mainly use navigation, communication and the Office suite applications.

The result ended up disappointing. In just 1 hour and 35 minutes, the notebook was fully discharged. Most likely, the power of the hardware and the presence of several LEDs turned on by default ended up affecting the total autonomy. 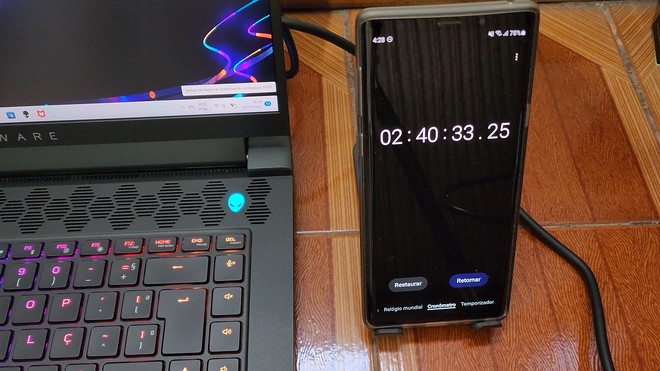 As for charging, the 240W adapter did not prove to be as fast in proportion to its power. It takes 2 hours and 40 minutes for the battery to reach full charge again. 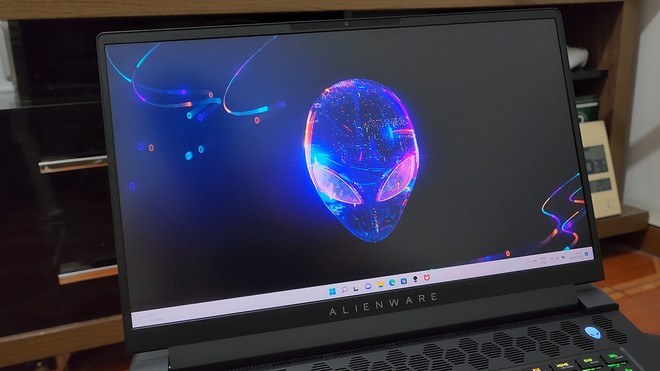 Overall, we see here a gaming notebook that meets the most demanding level that you can have on the market. The graphics and processing components deliver the best at the moment, the screen guarantees image and fluidity necessary for an above average experience, in addition to high quality sound.

The caveats are on account of more parallel details. We include here the construction with substandard materials, the impractical body to transport and the disappointing battery in terms of autonomy, in a segment that no longer stands out for its duration.

No backlight in seconds

The M15 R7 can be found in Europe for a suggested price of R$ 14,799. It is a very high value for the purchase, which would be in a more recommended condition if it was close to R$ 10 thousand, something below its direct competitor from Avell, for example.

Did you like what this gaming notebook delivers? Do you think it’s worth paying the price for a unit of it? Comment with us!