A quadcopter drone that can be launched from a submarine underwater

A drone that can work underwater is not an easy thing to make. The density of water is very different from that of air, and engineering has to adapt perfectly to the environment. That is why it is very difficult to create a drone that can be launched under water and come up to the surface to fly.

Something like this is what they have created in SpearUAV, an autonomous quadcopter that can be launched from a submarine to surface and have a better field of view, without relying on periscopes.

Submarines have come up with various solutions over the years, from kites to gyrocopters, and even planes from submarines, but having to surface to deploy them is a drawback.

The new Ninox 103 looks like a normal drone, and is stored in a capsule that can be deployed from a submarine. This capsule floats to the surface and can lie dormant for up to 24 hours before the rugged, rugged drone is launched into the sea. In other words, the drone is not deployed underwater, it is protected in a capsule, so that it never gets wet or has to adapt the force of the propellers to the density or underwater pressure. 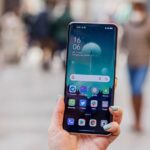 The best phones of the year (2022): their analysis and videos are here

In the air, the Ninox 103 has a range of 10 km and an autonomy of 45 minutes. It weighs 1 kg, and can collect acoustic, thermal and visual signals thanks to electro-optical/infrared sensors. It also uses encrypted communications, third-party data integration, and cross-device connectivity, as is common in military technology.

Its full name is Ninox 103 Sub-to-Air, and it is already being used by various defense companies. In the video above you can see it in operation.