Google reports that there are 3.48 million apps available on the Play Store, and according to a survey released earlier this month by incognitothe estimate is that 55.2% of titles provide user information to third-party servers.

The Dutch company’s report reveals interesting data about public privacy. Unsurprisingly, “tech giants” collect the most data from users — such as Facebook, Instagram and Snapchat — and free apps can track up to 7 times more information than paid titles.

Apps that collect the most data, according to the survey (Image: Incogni)

More popular apps also have a tendency to send more user information — or “data points” — to third parties. When comparing software with more than 500K downloads, it was observed that this category can crawl up to 6.15 times more than the less popular names on the platform.

Meta apps like Facebook, Facebook Lite, Messenger Lite, Messenger and Instagram are the ones that collect the most information about you, despite stating that you share very little. The company claims to only share 4 data points, but they actually collect 36 out of 37 data points — almost everything there is to know about you.

Among the categories that most share data with third parties, shopping apps lead with an average of 5.72 types of information shared. Interestingly, social networks provide the least but are still the most intrusive category in terms of data collection — about 19.18 types of information, on average.

The top ten apps that provide their data to third parties the most fall into different categories. A leader in this regard, “Cast for Chromecast & TV Cast” shares name, email, phone number, location and various other types of information about users. Picsart and Reddit are two of the most popular titles in the rankings. 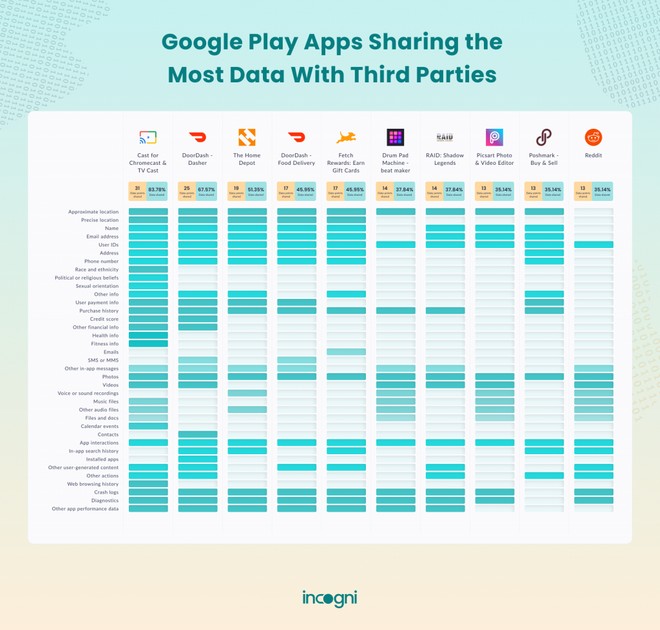 Apps that provide data to third parties the most (Image: Incogni)

The research adds that the most provided data may have common information, such as crash logs and diagnostics, but also often include the user’s location, name, phone number, and other sensitive details.

Google strives to help users and make store apps more transparent, but Google experts incognito assess that there is still much room for improvement.

“Google does not disclose all types of data transfers. For example, any transfer made to a service provider, legal purposes or anonymous data will not be explicitly stated in the data security section of the Play Store”, comments Federico Morelli, author of the research blog.

THE incognito created the report based on the 1,000 most popular apps on the Play Store, according to the AppFigurestaking into account 500 free titles and 500 paid titles.