After two years of deliberations, the National Labor Relations Board (NLRB) gave his verdict last Thursday on the Tesla case and its relationship with the unions. Since Elon Musk posted a controversial tweet in 2018., the auto company has been accused of violating US labor laws.

Finally, last Thursday the NLRB declared that it effectively considers that Tesla violated not once, but several times, these laws. Because of this, they have already released an ad in which they place the entirety of their decision and the actions that they hope the car company will take soon.

Specifically, the regulatory entity issued its opinions considering two particular incidents. One occurred with the dismissal of an employee in 2017 and the aforementioned 2018 tweet.

Elon Musk must remove the tweet that violates labor laws 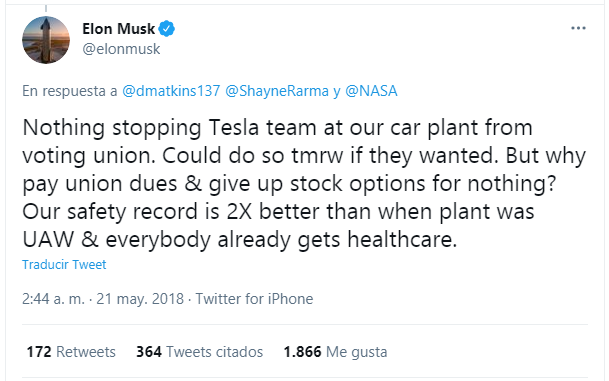 “Nothing is stopping the Tesla team at our auto plant from voting to unionize. They could do it tomorrow if they wanted. But why pay union dues and give up stock options? [en Tesla] you are welcome? Our safety record is 2 times better than when the plant was UAW and everyone already receives medical attention, ”the tweet reads.

The first point the NLRB makes is that Elon Musk must remove the tweet that goes against US labor laws. So far, the tycoon has not complied with this mandate, so the publication is still available on Twitter.

However, the United Auto Workers (UAW) union may lobby for this order to be enforced. Especially since in 2018 it was they who filed an official report before the NLRB against Musk’s tweet, since it seems that the businessman threatens his workers with removing their access to Tesla shares if they unionize.

Both Musk and the company, Tesla, have denied these allegations. They say that they only refer to the situation of other unionized companies where the option of access to shares does not exist for all employees. However, the UAW continues to argue that the brief can be interpreted by workers as a deterrent threat.

In addition, Tesla will have to make changes to its structure and patch up past decisions

Elon Musk’s tweet wasn’t the only action the NLRB saw as a violation of American labor laws. In fact, he also gave his verdict on the dismissal of employee Richard Ortiz.

During 2017, it emerged as the face of the ‘Fair Future for Tesla’ union movement. Shortly after this, he was fired and Tesla claimed that the motive had been a violation of the company’s confidentiality agreement. All because Ortiz spoke to the media about the complaints and demands they had for working conditions at the company.

Now, the NLRB has ruled that Ortiz should not only have his job back, but Tesla will have to make up for “any lost income” and “any adverse tax consequences” that resulted from his firing.

In addition, the NLRB also required Tesla to review its confidentiality agreement. This since they allege that the National Labor Law “protects employees when they speak to the media about working conditions, labor disputes, or other terms and conditions of employment”. So there should be no reason to fire an employee for talking about their working conditions in the first place.

Silicon carbide semiconductors: what are their properties and why are they a valuable ally for the electric car

Silicon carbide semiconductors: what are their properties and why are they a valuable ally...